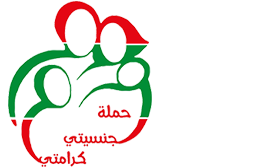 “My Nationality, My Dignity” Campaign

An empty world from racism and discrimination.

Was established in 2011 as a non-governmental organization working in Lebanon to advocate woman rights, promote and implement local and international laws relating to the rights of vulnerable groups and equality between men and women.

The Association provides legal and social assistance to the vulnerable groups as stateless, works to claim citizenship for them and for the children of the Lebanese mother, rehabilitation of female prisoners and combating physical and psychological violence. The Association offers psychological awareness programs, human skills development, legally consultancy, and help to those who don’t have access to health and education.

It launched the campaign “My Nationality, My Dignity” which Primary objective is to demand that the Lebanese government grant Lebanese women their constitutional right to transmit Lebanese nationality to their children. In addition, to correct the status of stateless in Lebanon.

Personal status laws consistent with international laws and treaties and sportive of the rights of marginalized group in Lebanon especially women and stateless, supported by appropriate mechanisms.